The Daily Mail has a new article (May 24), which is reporting a few new points on George Michael’s accident:

As he recuperates in hospital this week, George Michael has, rather untypically, been avoiding the anxious calls of some of his oldest friends.

The singer’s mobile has gone largely unanswered and he has, so far at least, passed up the chance of using Twitter —  to which he was until recently addicted — to reassure his fans he is fine.

The article also says that George Michael still has not been released from the hospital after seven days in the hospital. 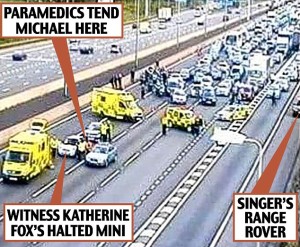 Land Rover, the manufacturer of the car George was in, is weighing in on the accident:

Now Land Rover, the maker of the luxury 4×4 involved in the incident, has added to the intrigue by telling me it is highly  unlikely the accident could have taken place the way it was  reported.

Its intervention brings into question the apparent testimony of the driver and another passenger in the Range Rover who reported that the star accidentally fell out as he tried to open and shut a passenger door that had not been closed properly.

The company told me this week that all its modern Range Rovers, like the one George Michael was in, have a sophisticated warning system to tell the driver — and passengers — if any of the car doors are not fully closed.

As well as a warning light on the dashboard, a loud and high-pitched bleeping noise sounds continuously until the door is shut properly.

Having heard one in action myself this week, it is not something that would be possible to ignore for more than a few seconds. In which case, why did George not just secure the door before the car joined the motorway?

Land Rover also points out that current models have sensors that warn if a passenger is not wearing a seat belt.

Other experts say the vehicle’s door, which is weighed down by heavy side-impact protection, equipment for electric windows and the mechanism for the central locking system, would require some effort to open from the inside at high speed.

It’s understandable then that engineers at the car company might be scratching their heads. A spokeswoman for the singer refused to comment on Land Rover’s explanations.